I've had a couple of submissions for his name, but there's still time to submit your own. Taken from the very edge (hence the black bar at the top) of my sketchbook: 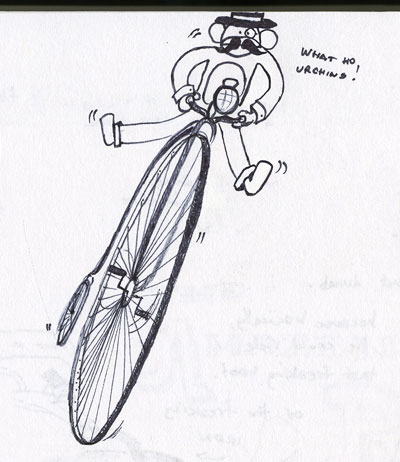 He still needs a name! I've probably got about five or six drawings waiting to hop online, so expect to see him posted here again and again until he's been christened appropriately.

That aside, here he is, presented in a Hilarious Wit, alongside his working-class chum, Barbisol.

What? Barbisol? Companion? Yes, that's right, but more on that later! 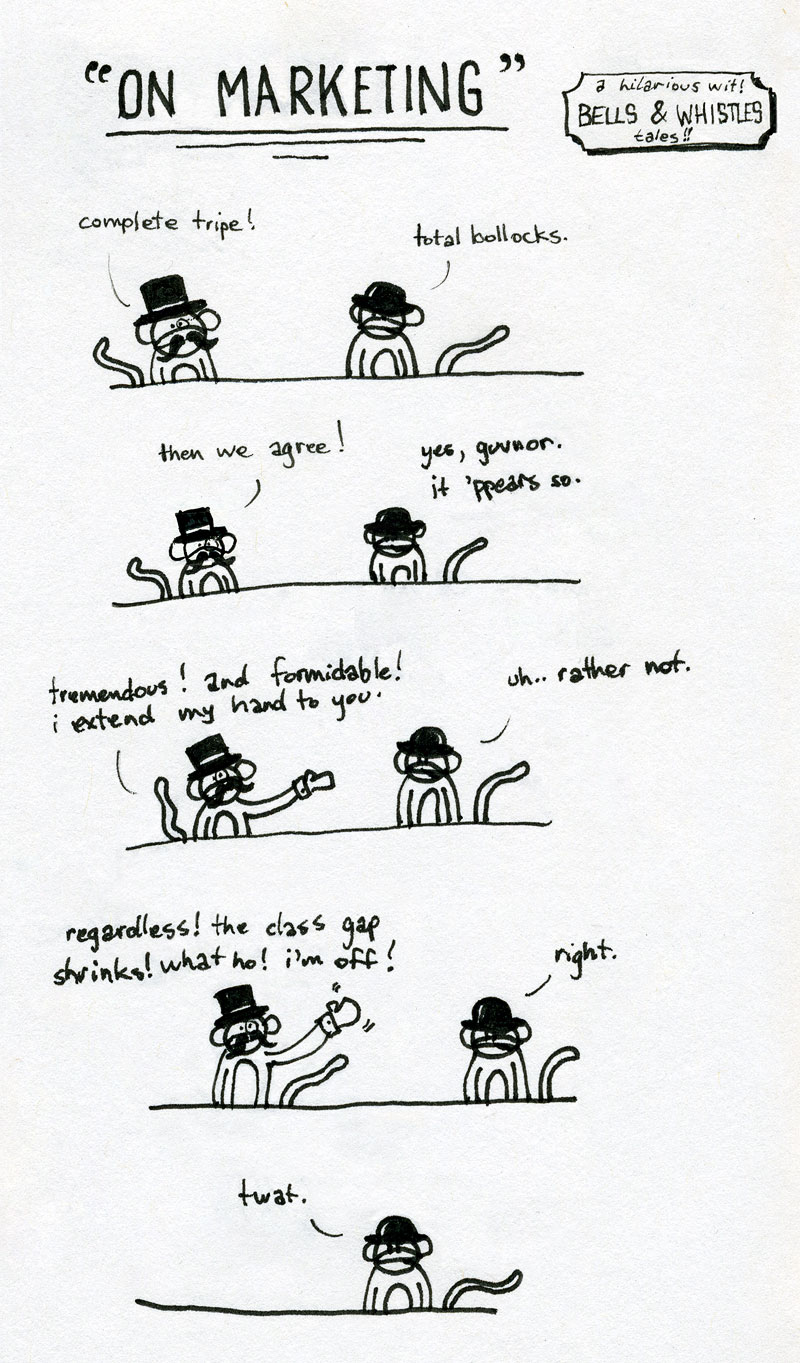 What's in a name?

This aristocratic monkey still needs a name. And the contest to name him is still open. And the prize, which is an original illustration of said monkey, is still up for grabs. 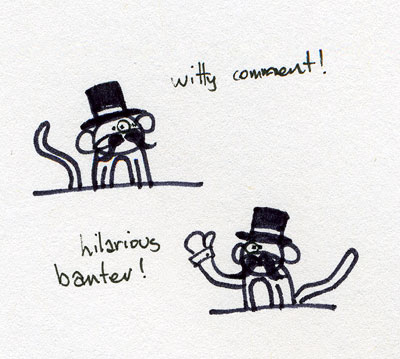 A new monkey, one of class and distinction, appeared very recently. Already having a moustache, top hat and monocle, the only thing he's missing is a name, which is where you come in.

My friend was dead on when he suggested that the Professor be renamed Herr Doktor Strangemonkey, so I'm asking you, dear readers, to help me name this guy. Leave your suggested name in the comments, and the winning one will received their very own original drawing of the newly-named monkey by good ole fashioned mail! 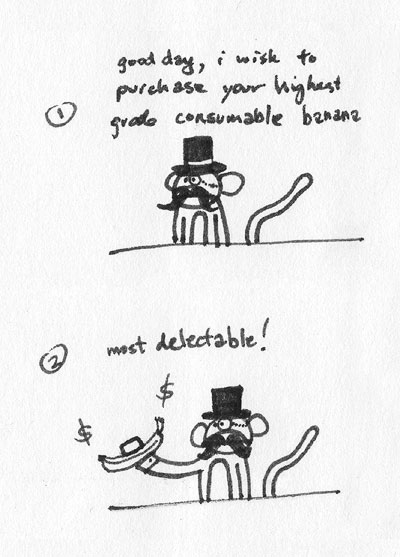 The Continuing Adventures of Watty 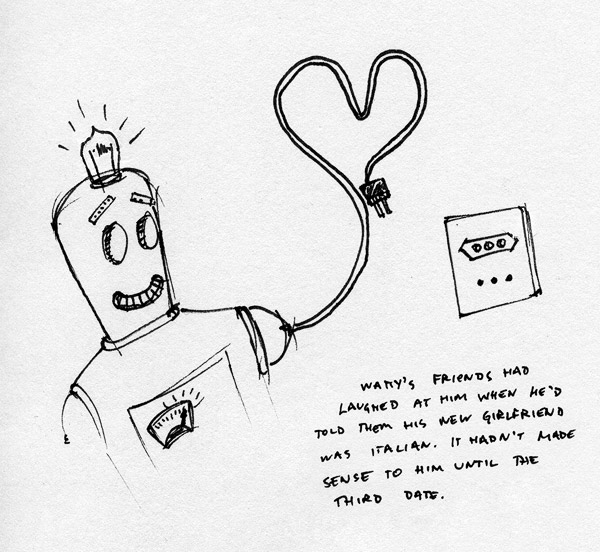 I wasn't aware that some of you were waiting for this year's incarnation of the Love Day Monkey. My apologies for keeping you waiting. 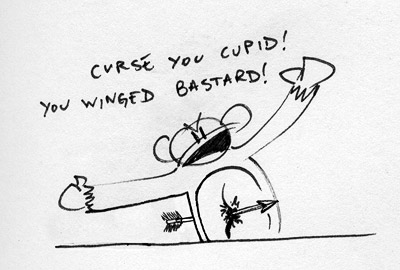 Account people are a dangerous breed, like a plague of zombie locusts which descend, albeit slowly (George Romero and Hollywood have proven time and time again that zombies are slow), upon the crops of the design industry at harvest time, making irrational changes and ruining layouts which would have once been bountiful.

Account people are like zombies – animated corpses which shuffle the earth, moaning as they fumble about, striking terror into the hearts of junior designers. Those who were only recently turned into zombies search for one thing from the humans they encounter: the PDF.

However, it is the truly dangerous zombies who know two, or even three acronyms in the business. Those who roam endlessly trying to find a PDF, or a JPG or a gasp! TIFF are a menace to the design business.

A typical encounter may be as follows:

Designer: He punches the zombie in the head, attempting to damage the brain, or even remove the head. He is unsuccessful. "What do you need it for?"

D: Swings his ruler at the AE. It hits the zombie on the side of the head, a glancing blow which doesn't deter it. "You'll probably want a JPG then."

D: Decides to use a distraction. "Right. Check your e-mail." 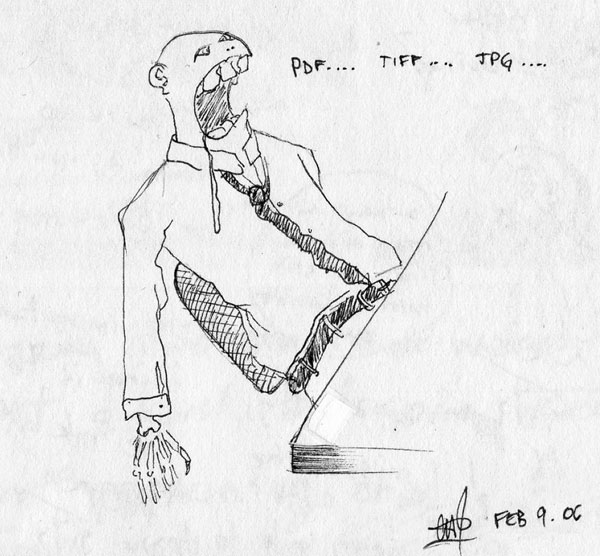 Would more people comment if I took off word-verification? Or am I just hoping?
Posted by Design Monkey 2 comments

I'm truly lucky that my studio manager happens to be a good sport, not to mention a good personal friend. Almost all of the change documents that come my way have spelling and grammar mistakes, and I usually send them back covered in monkeys ridiculing these mistakes. 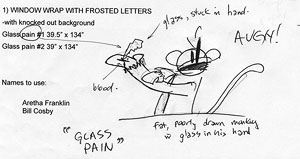 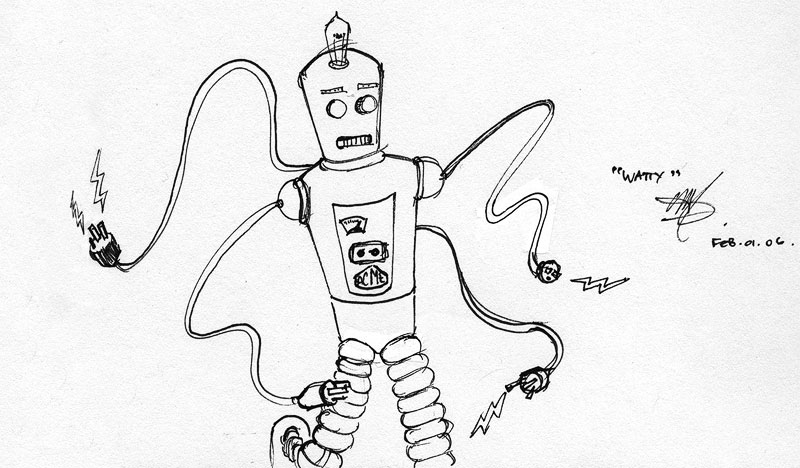 This guy's been in progress for a while and I think I'm going to be drawing him again over the weekend. He still needs his tall, springy legs which he uses to bound from place to place, in his constant search for available outlets to power the bulb in his head.

For those of you who are interested in seeing the evolution of a scribbling – Watty started off in a slightly different direction, with claw arms (early sketch) and then developed his current electrical plug arms (second sketch).
Posted by Design Monkey 1 comments