Bells & Whistles, This Being the Fourth Such Episode

Once again, it is a veritable gladness to put forward another installment of Bells & Whistles: A Hilarious Wit! Our titled simian playfellow is back with his proletarian counterpart Mr. Barbisol. It would seem that His Lordship has a proclivity to be somewhat unmindful, no doubt due in part to the strains and pressures of aristocracy. As one will see, this begets the most rollicking consequences! 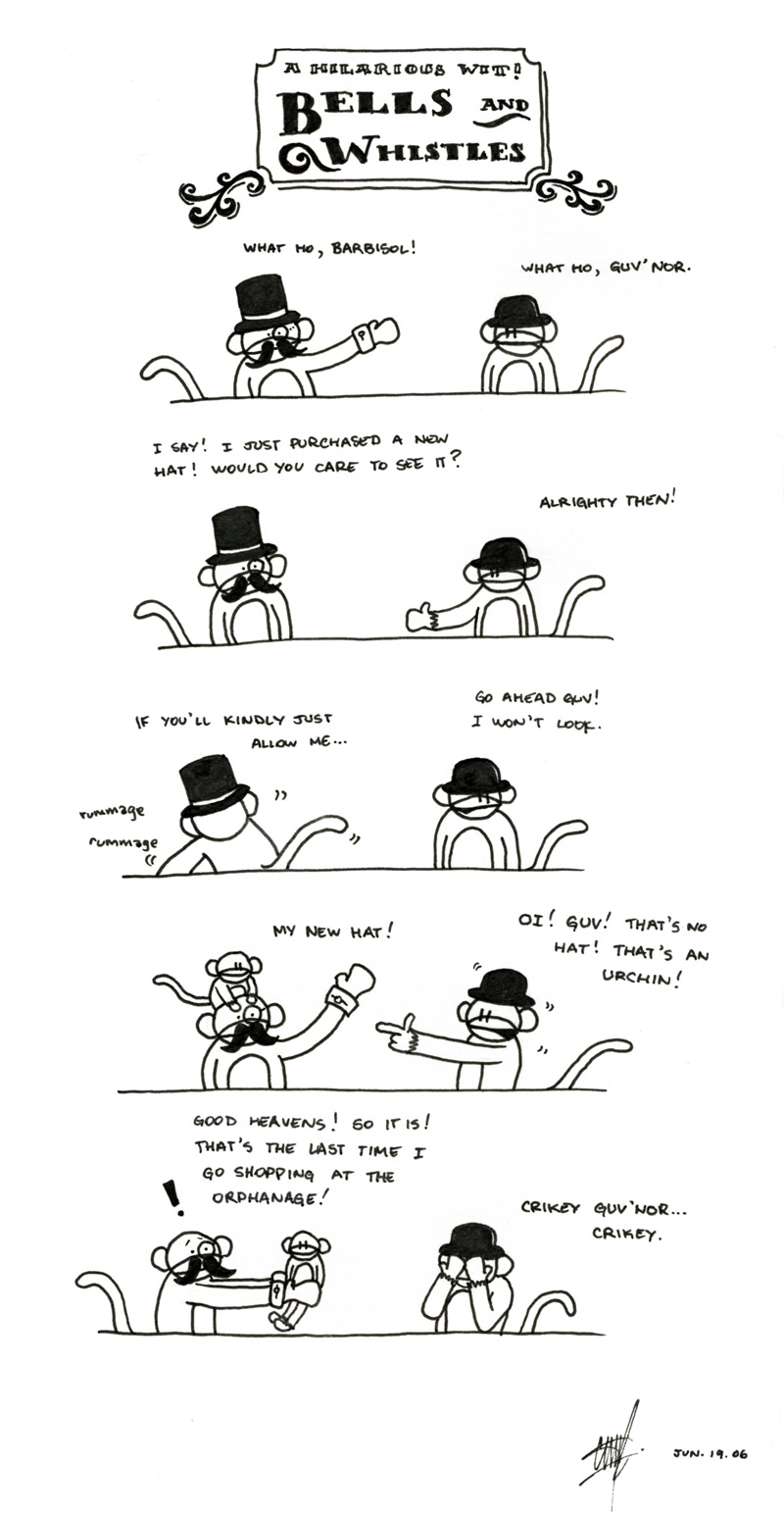 We feel it imperative to direct our kind and warm readers to the original inspiration for this Wit. The gentlemen at the Penny Arcade presented their original rib-tickling narrative to a number of striplings and lasses. Our interpretation of their drollery was only complemented with the addition of a winsome baby monkey.

If one so desires, the supplementary episodes of Bells & Whistles: A Hilarious Wit! can be found here, here, and here. And, although I fear it is in vain, I must solicit monikers for our aristocratic friend anon.
Posted by Design Monkey 0 comments

Shamless self-promotion: Scrawl got an update of Edmonton work this morning. I just received some work from an artist in Nicaragua, so I hope to get that online later today. And my friend Ian was kind enough to shoot a whack of stuff from Iceland, so expect to see that soon as well.
Posted by Design Monkey 0 comments

Scrawl got updated this morning with some work from Edmonton, Alberta. If you're around campus or the south side, you've probably already seen the "Listen" Bird. Thanks to the efforts of a U of A student, I'm able to present a gallery of collected instances.
Posted by Design Monkey 0 comments

Hee hee he. Naw, I'm kidding. My clients are great. 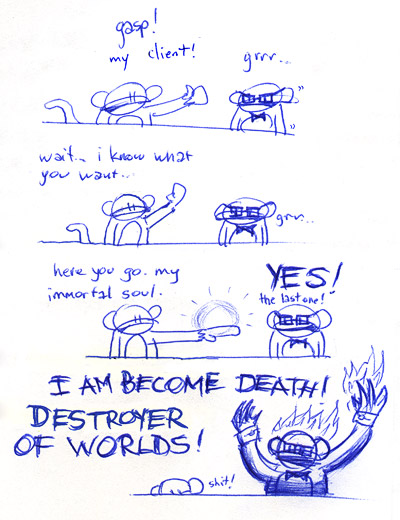 The Worldwide Short Film Festival has been running their advertising campaign for the past couple of weeks. It's pretty clever for the most part - a photograph of a theatre chair, with a different treatment each time. For example, "Canadiana" shows the seat, with stubbies in the cupholder. "Sci-Fi" has the drink levitating in the holder. Romance shows the chair wrapped up in saran wrap. You can see a couple of the executions on their home page.

Here's the part where their campaign isn't so clever though. While waiting for a streetcar the other day, I snapped this photo: 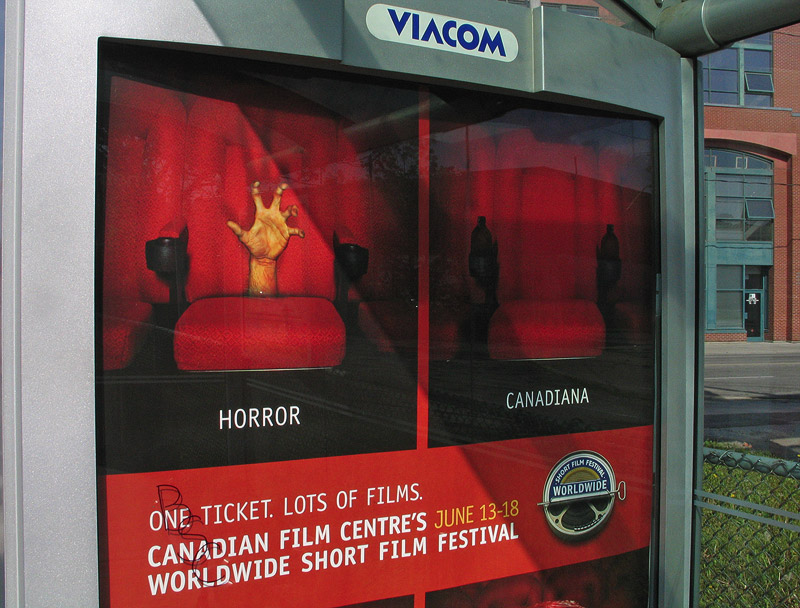 Yeah. Does anyone else think that "Horror" idea looks familiar? Oh yeah. We had that precisely that idea last year.

What's really disappointing about this is that not only is it unoriginal and a rip-off, but also the chair really lends itself to better ideas. Why not have the chair cushion cut up, with deep slash marks, oozing its upholstery as though some deranged maniac took a knife/chainsaw to it? There's an entire sub-genre called slasher films, after all.
Posted by Design Monkey 1 comments

This, with any luck, will turn into a hilarious cartoon for your amusement. 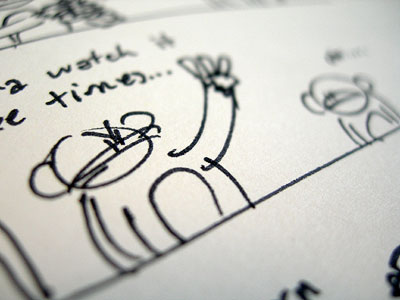 As you may have noticed with my blog, I've rediscovered my passion for drawing. It's great, and I've been filling up sketchbook pages faster than before. One of the things I've been trying to do is to add a good deal more depth to the monkeys, who have, up until now, always just been very much line drawings. Colour, more expression, more movement and full bodies are all recent developments. 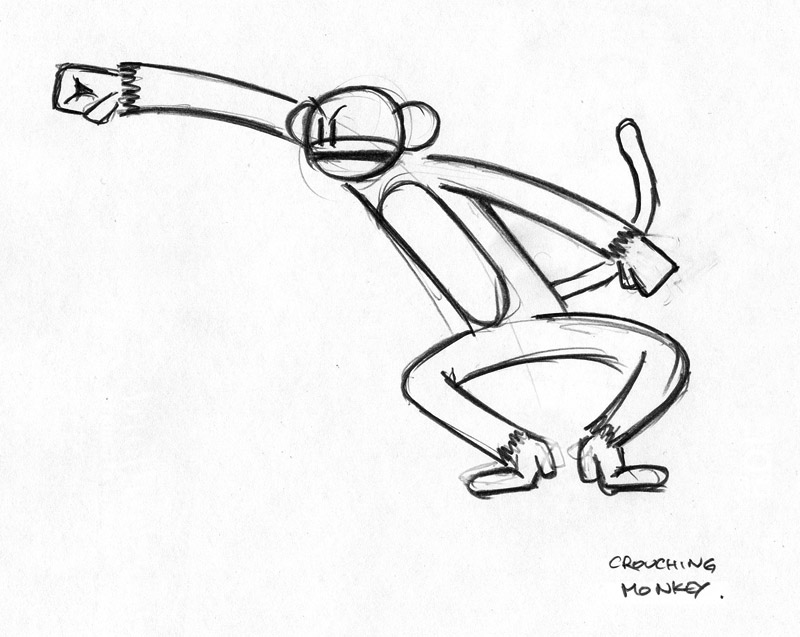