I really enjoy the positive feedback that Duolingo employs. Once in a while, it's unintentionally funny. Yes, I have learnt communication. 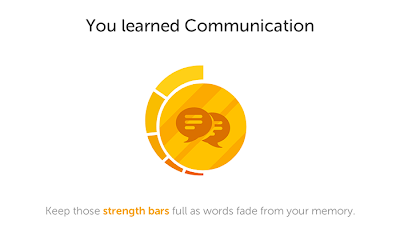 Film Titles: All Hail the King

I'm a big fan of the current series of Marvel Studios* films. Marvel has brought titles and characters like Thor, Iron Man, Captain America and the Avengers to the big screen with skill and passion, all while respecting the source material.

One of the things I enjoy almost more than the films themselves is the Marvel One-Shots – shorts that take place in the same universe and often deal with the minor or supporting characters. The latest of these One-Shots is "All Hail the King", which deals with events from Iron Man 3.

While the short is funny and very well executed, the best parts for me was the title treatment and the end credits. With visuals that would feel right at home in a late-70s exploitation or spy film, the titles are awash in colour, geometry and motion. They're a treat to behold, right down to the slightly fuzzy, indistinct letters.

An example of the animation:

The designers of the titles, Perception, wrote up their process for their website. It's a fantastic read and a great insight into their process and execution.

* As opposed to the Marvel properties currently being developed by other studios such as Sony's Amazing Spider-Man and Fox's X-Men.
Posted by Chris Govias 0 comments